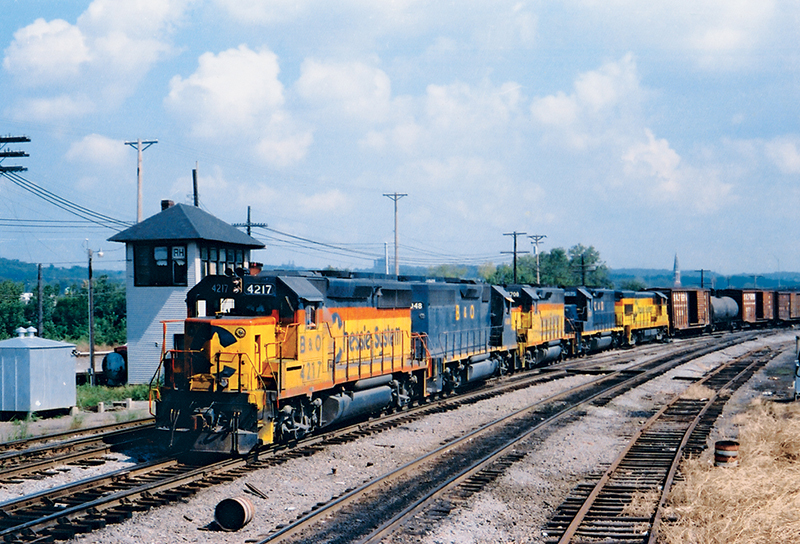 A colorful assortment of EMD GP40s and GP40-2s, plus one General Electric U-boat, are bringing a southbound freight from Toledo past RH tower to its terminus in Cincinnati. The 4217 is from B&O’s big order of 62 GP40-2s delivered in 1975, as they continued to standardize their locomotive fleet with modern power from EMD. 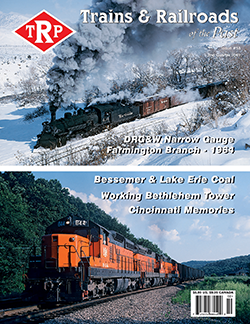 by Carlton Moore/photos by the author

My fascination with trains started from a child’s perspective. When I was five years old my Dad would take me for rides on the subways in New York City. To accommodate my interest in trains, he would always go to the first car and pick me up so that I could look out the front window and watch the tracks, tunnels and signals as the train would speed along the right of way. That led to playing with the model trains I received as Christmas presents.

As my family had occasion to travel to various states by car, I could watch freight trains near the highway. Starting in the seventh grade I began purchasing publications, including Trains and Railfan & Railroad. After reading these magazines and being captivated by the pictures, I was determined to visit some of those locations.

My first real exposure to live freight trains happened in Cincinnati, Ohio. Baseball was, and still is, popular in that city. My grandparents were residents of Cincinnati and I visited them often. My friends and I frequently played baseball in a park adjacent to the Baltimore & Ohio’s Cincinnati-Grafton main line, which gave me further exposure to heavy-duty railroading. At the age of fourteen, I decided that it was time to start photographing freights, so I began to take color prints. It became obvious to me that Cincinnati was a huge hub for railroads. At that time there was the Chessie System, Norfolk & Western, Southern, Conrail and Louisville & Nashville — wow! 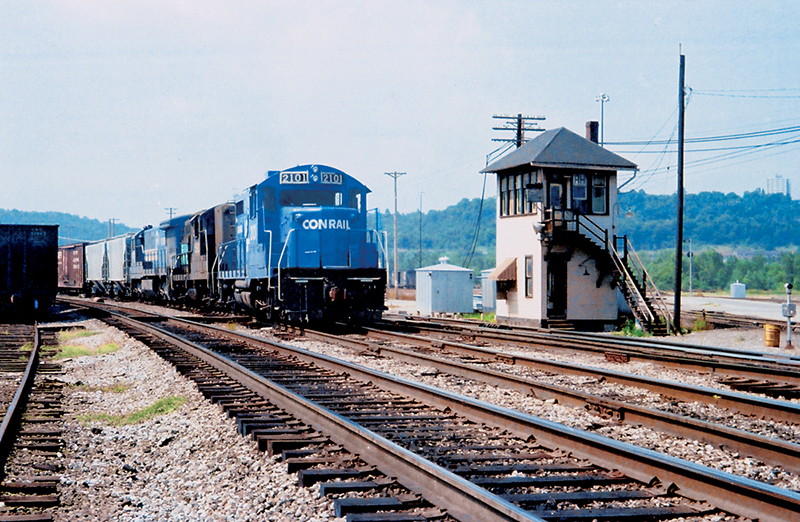 Conrail had trackage rights on Chessie System tracks in Cincinnati. A freight with a very diverse set of power, led by GP20 2101, heads north past RH tower, a location that saw many freights pass by daily. Conrail only inherited 13 of the 15 ex-New York Central GP20s onto their roster, so this was a very rare catch — also, it appears to be fresh out of the paint booth. Notice that it has no dynamic brakes — who needs them on the Water Level Route?

So, in addition to visiting “Grandma” and “Grandpa” twice a year with my parents for Thanksgiving and Easter, I would travel by Amtrak to Cincinnati during the summer when I was a teenager. I figured out how to get to RH Tower, Clare Yard, Decoursey Yard and Ludlow, Ky., and took pictures at these locations for seven years, from 1977 to 1984.

It’s nice to visit scenic locations on main lines, but the yards are an important part of railroading, as well. I’ll share some of my memories of the operations in the Cincinnati, Ohio, area yards. When I started this venture, my uncle had to escort me to “make sure his nephew was safe,” being that I was fourteen years old. Back then we wandered through the yards after obtaining permission. Eventually I would go by myself. 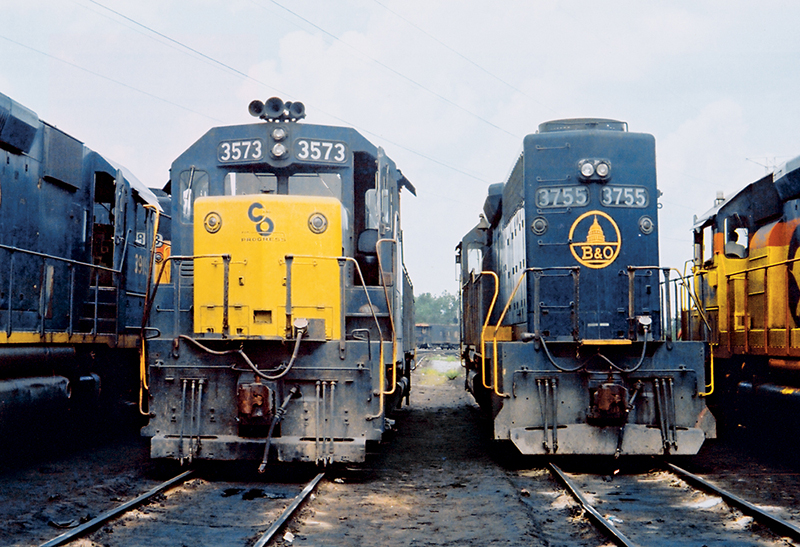 The yellow nose of Chesapeake & Ohio GP35 3573 and the solid blue long hood of B&O GP40 3755 make an interesting contrast. Also, you can see a Baltimore & Ohio caboose on the rear of a train in the distance. Notice the crewman in the cab of the GP40-2 on the right as he gets ready to gather his train in August 1978. This is Chessie’s engine facility located behind the Reyerson Steel plant.

Decoursey, the L&N northern terminus, was my favorite location. The yard was home to General Electric U25B’s that switched the yard and were also used on transfer cuts. A lot of coal trains came through from the south. Some went to Conrail or the Detroit, Toledo & Ironton. Other than that, mostly manifest trains dominated, with maybe two TOFC (trailer-on-flatcar) trains a day. Also, there were some dedicated auto rack trains, as well. Chessie system transfers were frequent, and all types of power would show up at Decoursey, especially in 1977 and 1978. L&N Alco’s, as well as leased power from Southern Pacific, Canadian National and Auto Train, plus Seaboard Coast Line and Clinchfield units were sprinkled in. You really can’t beat that!

RH Tower closely followed Decoursey as far as activity was concerned. RH was Chessie’s sentinel in the pre-Queensgate Yard era, guarding the B&O main north towards Dayton. There were some piggybacks, but mostly manifest trains. Also, some auto trains came south. Coal came north from the Louisville & Nashville and from the Chesapeake & Ohio. Grain trains were seen occasionally. Power was almost always Chessie System’s standard GP40-2s, GP40s, GP35s, GP30s and some General Electric power, too. Conrail had trackage rights through here, bringing even more variety. Employees in RH Tower were very friendly. After 9/11, I doubt that kind of railfan-employee cooperation and access is possible. 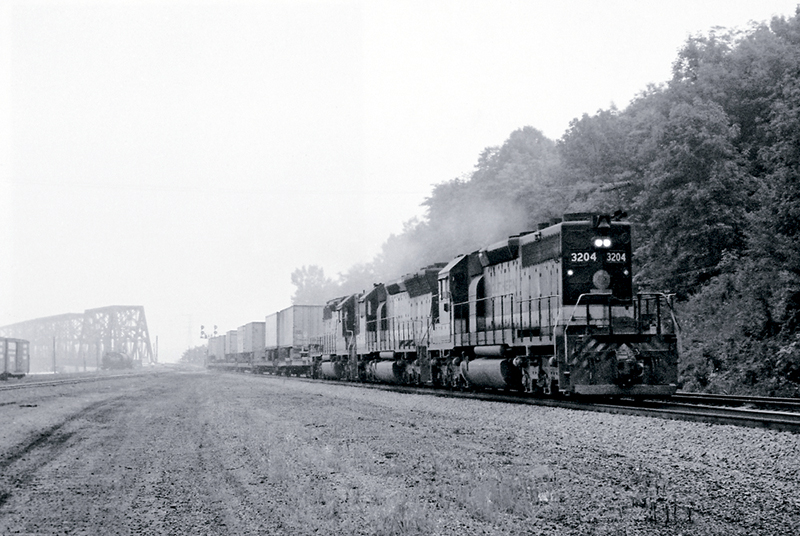 Southern Railway orchestrated their trains in Gest St. Yard in Cincinnati, then ran them south across the bridge to Ludlow, Ky. An SD40-2/SD45/GP50 lashup seems to be entirely too much power for this piggyback train seen in August 1982. Pushers were used on some trains here, but not this one.

Ludlow, Kentucky, the Southern facility, was also pretty active. Heavy trains used helpers southbound for assistance over Erlanger Hill. Lots of TOFCs here and auto trains, but manifests, as well. Detroit, Toledo and Ironton ran transfers through here and eventually Grand Trunk power was common. I even remember ex-Rock Island GP38s on a freight with two SD40s at sunset. Once in a while I would witness a Conrail unit. Boy, those high-nose Southern, and Norfolk & Western units for that matter, were something! Classic! It’s too bad that hi-hoods have gone the way of the dinosaur. 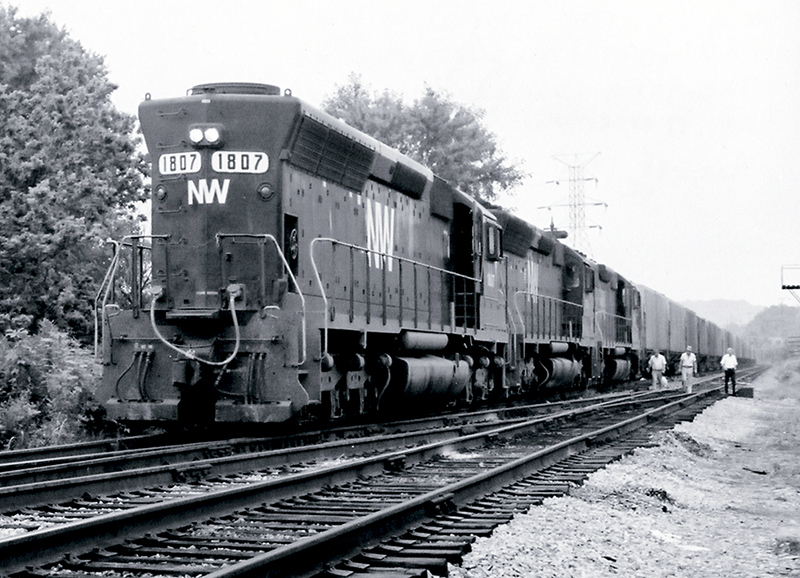 Two SD45s and an SD40-2 are the power for train FP-80, a grain train handed to the Norfolk & Western from the Union Pacific. This train is changing crews at Clare Yard in Mariemont, Ohio, in August 1980.

Last, but not least, was Norfolk & Western’s Clare Yard in Mariemont, Ohio, a suburb of Cincinnati. It was only about a 20-minute walk from Grandma’s. Just about anything N&W had was possible here. ALCO’s, GEs, SD45s, SD40s, SD40-2s, GP35s, GP40s — even foreign power from the D&H or Union Pacific on grain trains. You could even see Southern Pacific and Santa Fe units on occasion. Clare’s train count was not that high, however — some grain, coal and a couple of manifests was it. The westbounds came in during the morning and the eastbounds that were headed for Portsmouth, Ohio, and beyond would leave in the afternoon or night. The people in the yard office there were also good to me.

I haven’t been to Cincinnati since my grandmother’s passing twenty-two years ago, but I dedicate this to her and my uncle, who certainly wondered what I was doing chasing trains all the time. He and his family still reside there. There have been major changes to the locations I used to visit. The CSX Line east to Grafton, W.Va., that ran by Grandma’s is not functioning anymore. The ghosts of Decoursey are long gone, as is the yard itself. CSX utilizes Queensgate Yard now. The engine facility behind the Reyerson Plant is not used anymore. Clare Yard is now used by short line Cincinnati Eastern Railroad, and I am certain that the traffic through Ludlow on Norfolk Southern has increased. Third generation power has replaced second- generation power, but the memories will never go away!

See the rest of this feature in the 2019-02 issue of Trains & Railroads of The Past! 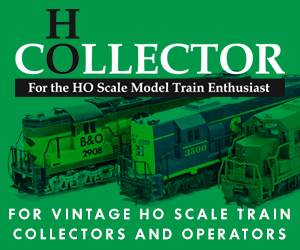 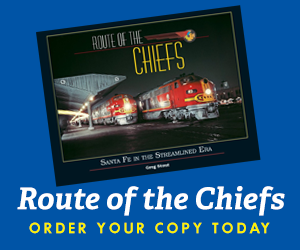