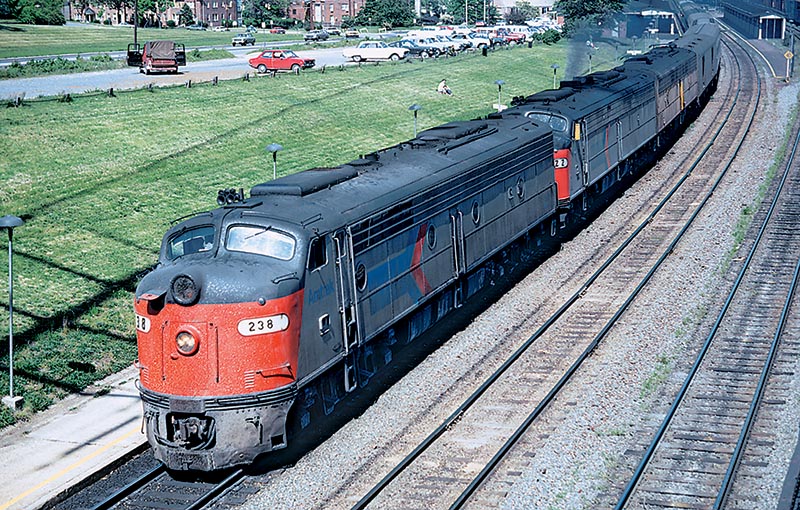 While a Chesapeake & Ohio freight slowly pulls into Pot Yard, southbound Amtrak Train 81, the Silver Star, arrives at the Alexandria station area behind a trio of E-units, with platinum mist E8’s 238 and 222 working with Union Pacific-painted E9B 468B. This view, looking north off the Duke Street Bridge, gives a good look at the Alexandria station area and parking lot. Amtrak’s Silver Star ran between New York City and Miami, Florida. The train was initiated in December 1947 by the Seaboard Air Line Railroad, and the service continued after Amtrak came into being in 1971. Amtrak E8 238 was built by EMD as Missouri-Kansas-Texas 106A, the first unit of a four-unit order completed in March 1950. The 106A was later renumbered, becoming Katy 52A. In July 1965, MKT dropped their passenger service and all nine E8’s were sold to Precision Engineering, who quickly resold them to the Atlantic Coast Line, where the 52A became ACL 549. After the Seaboard Coast Line merger, ACL 549 became SCL 580. With the coming of Amtrak, SCL 580 then became Amtrak 238. Amtrak E8 222 is right at home, as it was built as RF&P #1014 in October 1950, the third unit of an four-unit order. 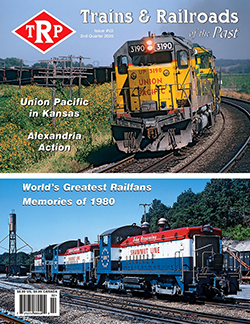 Alexandria, Virginia, is located just across the Potomac River from Washington, D.C., and is the north end of the Richmond, Fredericksburg & Potomac Railroad (RF&P). The RF&P’s large Potomac yard was located in Alexandria and it is where the RF&P connected with the Chesapeake & Ohio, the Southern Railway and the Pennsylvania Railroad. Potomac (Pot) yard was very large, with part of the north end of the yard electrified for the PRR connection. While the Southern used Potomac yard for some of their trains, they also had a small facility called Henry Street Yard, which they used to serve the local business.

In 1973, Pot yard and the Alexandria Station area were quite busy with traffic from Amtrak, C&O, RF&P and Southern all passing the station area on the four-track main line. Tracks 1 and 2 were the freight tracks and tracks 3 and 4 were the passenger tracks that passed close to the station. A couple of C&O and Southern freights headed through the station area each day, along with Southern transfers from Henry Street. In addition, the Southern, who didn’t join Amtrak in 1971, still operated three sets of trains through Alexandria, all of which stopped at the RF&P station. Amtrak operated several trains through Alexandria, and also stopped at the RF&P station. The RF&P was also quite active, running a large num-ber of freight trains through the station area.

Photographer Edward W. Horm lived in the Alexandria area during the late 1960’s, before moving to Pittsburgh. After moving to Pennsylvania, Ed made several trips back to this area to shoot the RF&P. A couple of years ago, I acquired my friend Ed’s slide collection, who has since passed away. I have spent the last couple of years going through his slides, trying to get them into some kind of order. These pictures highlight some of Ed’s photographic talents, including one memorable trip to Alexandria over the weekend of May 5 and 6, 1973. 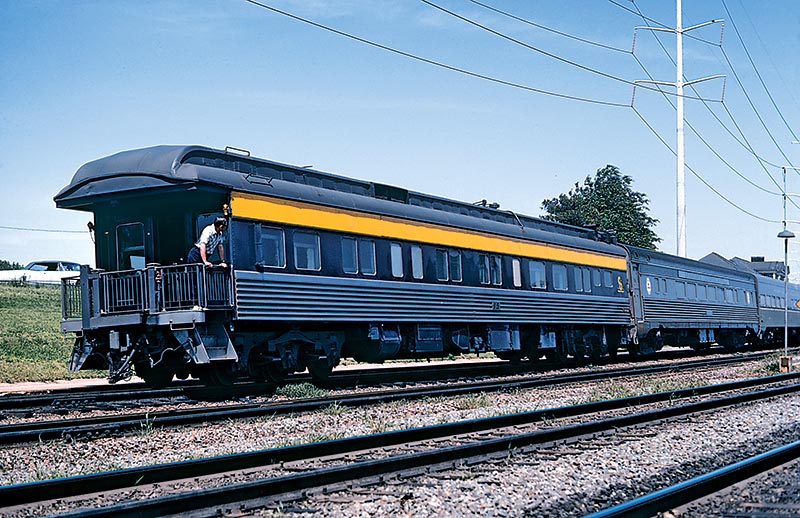 ABOVE: Arriving shortly after Southern Train 8, Amtrak Train 50, the George Washington, showed up with blue Chesapeake & Ohio passenger GP7 5896 leading Amtrak E8 #200 and three cars, including C&O 15 on the tail. The George Washington was due to arrive in Alexandria at 12:15 p.m., but was running late this day, perhaps due to traffic. In this time period, Amtrak was running a pair of Chicago-Washington, D.C., trains via Cincinnati; the eastbound train was named the George Washington and the westbound was called James Whitcomb Riley. In less than a year, the George Washington name would be dropped, with both sections of the train operating as the James Whitcomb Riley. This was the Washington section of the George Washington. The train split at Charlottesville, with part heading east toward Newport News, while the other section headed north toward Washington, D.C. Bringing up the markers is Chesapeake & Ohio observation car #15. It was built by Pullman Company in 1926 for the W.F. Kinney & Company, who named it the “St. Nicholas.” In 1939, the car was sold to the Pere Marquette, who assigned it no. 1. When the PM was merged in 1947, it became C&O 15. 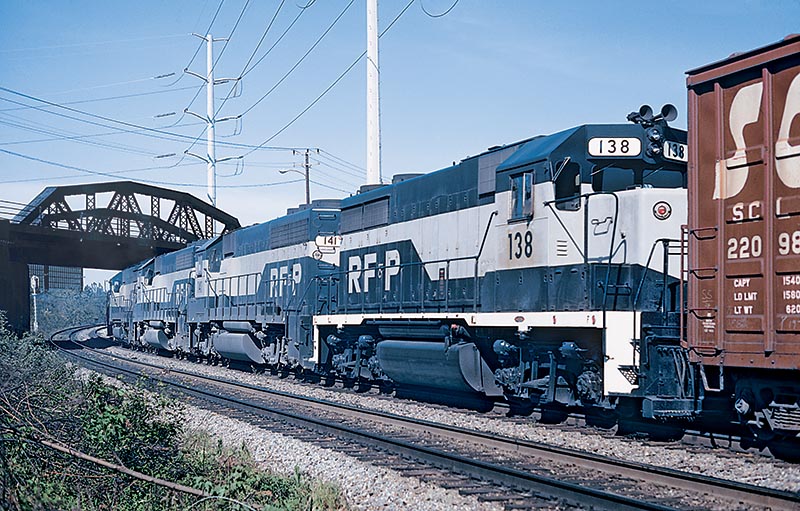 ABOVE: Following a Southern transfer headed south out of Pot yard behind SW1500 2300, an RF&P freight heads south behind 133, 142, 141 and 138 (GP35/GP40-2/GP40-2/GP35) and is seen approaching the Duke Street bridge. It was a well-known fact that during this time period, RF&P diesels always faced a certain direction. Odd-numbered units faced south, while even numbered units faced north. Just around the bend from the Duke Street overpass is AF interlocking, where the RF&P and Southern railroad main lines connected on their approach to Pot Yard. South of AF, the RF&P climbed up and crossed over the Southern main line. 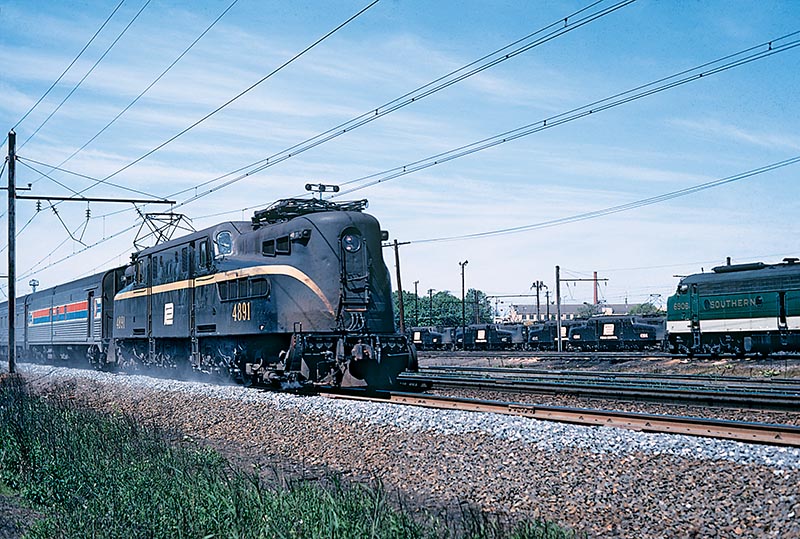 ABOVE: Northbound Amtrak Train 86, the Champion, rushes by the Southern E-units at the Ivy City engine terminal with Penn Central GG1 4891 leading the train. Note how the speed of the train is kicking up dust from the ballast, as the 4891 gets the train up to track speed after leaving Washington Union Station. It is interesting to note that the 4891 still sports Pennsylvania Railroad paint almost five years after the Penn Central merger. The Champion was scheduled to depart Washington Union Station at 11:05 a.m., but was running late this day. Here, the Northeast Corridor is only two tracks wide, with the other pair of main tracks belonging to the Baltimore & Ohio Railroad. The B&O tracks are easy to identify, as they lack the overhead catenary system found on the Northeast Corridor. 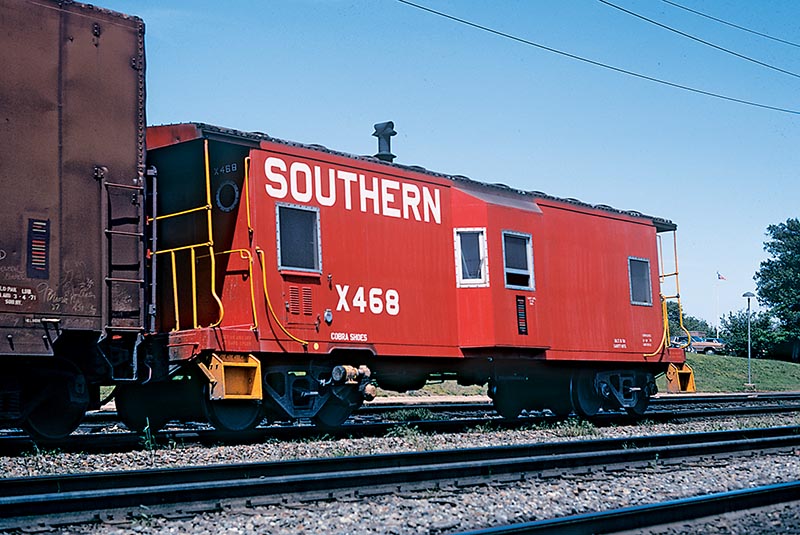 ABOVE: While the Southern Railroad had their own small yard at Henry Street in Alexandria, they also operated a couple of trains into and out of RF&P’s Potomac Yard. Mid-morning found a Southern southbound train leaving Pot yard with SD24 6346 and SD45 3143 for power and Southern caboose X468 bringing up the rear. Caboose X468 was part of a 113-car order placed by Southern in 1970 with Gantt Manufacturing and numbered X400-X512. It is easy to tell that the X468 is a road caboose by the full red bay window paint. The local cabooses, nicknamed “Yellow Bellies,” had the bay window painted yellow.

Read the rest of this article in the Second Quarter 2020 issue of Trains & Railroads of the Past!