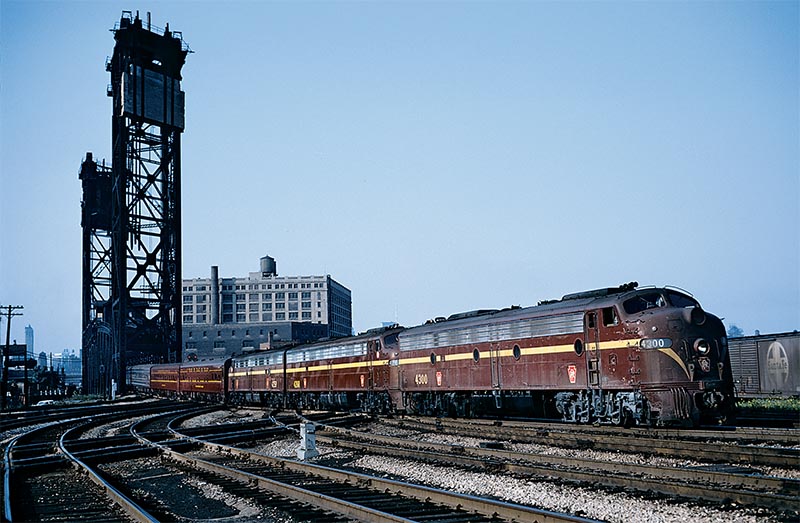 The head end of eastbound Train No. 28, the Broadway Limited, thumps across the Chicago & Western Indiana and Illinois Central at 21st Street in Chicago on a September 1967 evening. Most of the train’s consist is stretched across the lift bridge over the South Branch of the Chicago River. The days of No. 28 being an all-reserved, Pullman-only service are numbered. Before the end of the year, the Broadway will receive both coaches and a new number. Lead E8 No. 4300, the former No. 5700A, was the only PRR E8 to receive an experimental oscillating Mars light. Photo by John A. Kirchner

Compiled by the WRP Staff/Photos as noted 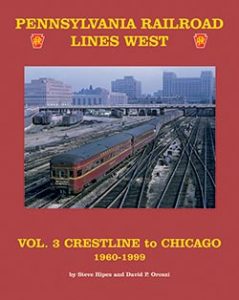 As the 1960s began, the Pennsylvania, along with other railroads in the Northeast, was confronted by a host of problems that threatened its existence. These problems included the out-migration of industry from the region, the construction and operation of competing highways and airports by government subsidy, increased wages and other operating costs and freight rate increases that were inadequate and failed to cover the cost of doing business.

Perhaps the biggest problem confronting the railroad industry was excessive government regulation. Railroads may have needed restraint when they held a transportation monopoly during the days of Morgan, Vanderbilt and Gould, but those days were long gone. Times changed and transportation became a highly competitive business. The rules governing railroads needed to change with the times.

The causal trackside observer in 1960 probably did not notice that anything was wrong with the PRR. The Main Line Pittsburgh to Chicago,often referred to as the “Fort Wayne” in deference to its predecessor, the Pittsburgh, Fort Wayne & Chicago, remained a busy main line. Although the passenger business was mired in the red ink that started to flow following the Second World War, PRR continued to give passengers options in terms of schedules and service. Freight business remained strong, with the fledgling piggyback service (“TrucTrain” in Pennsy-speak) growing into a multi-train operation. There were slow orders here and there due to deferred track maintenance and some equipment looked the worse for wear but overall, PRR did not look like a railroad heading for trouble. Looks can be deceiving, and in this case, by the design of top-ranking railroad executives. By the end of the decade, the failed merger between the Pennsy and its archrival New York Central would create the nation’s largest corporate bankruptcy and set into motion the chain of events that would eventually lead to the creation of Conrail in 1976. 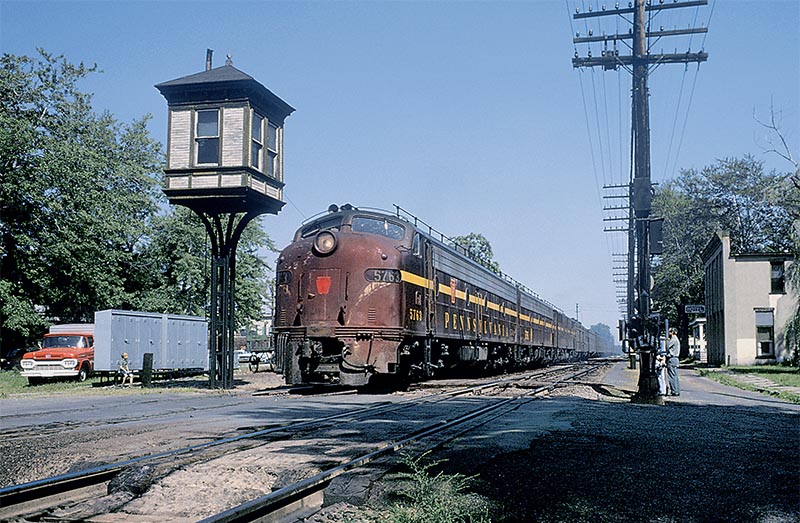 The crossing watchman, seated high in his perch above the tracks, lowered the grade crossing gates in downtown Warsaw, Ind., as the Pennsylvania Limited made its station stop in September 1964. Photo by Don A. Pope

It has been said that change is the only constant in life. Although the “Fort Wayne” east of Tolleston, Ind., dodged the abandonment bullet, the heavy-duty main line has been reduced to a single track operated by a regional carrier. Most of the Toledo Branch and GR&I are gone. The glaring exception to this story of doom and gloom is the Sandusky Branch, a profitable but secondary PRR line, which today thrives as a key route in the Norfolk Southern system.

In early 2016, one could still stand trackside at Whiting, Ind., just as people did 50 years ago, and watch an endless parade of freight and passenger trains speed down a multi-tracked main line, obeying the indications of position light signals. The position light signals might be on borrowed time, but the volume of freight traffic using former PRR rails there continues to grow.

The Pennsylvania Railroad Lines West series continues with Volume 3: Crestline to Chicago 1960-1999. Featuring the stunning color photography of Steve Hipes and David Oroszi, this new hardcover book covers the eras spanning from the Pennsylvania Railroad through Penn Central to Conrail. Coverage includes the mainline from Chicago via Fort Wayne, the Grand Rapids & Indiana to Mackinaw City, the Toledo and Sandusky branches, and much more. Enjoy this sample from the pages of this colorful look back at a bygone era. 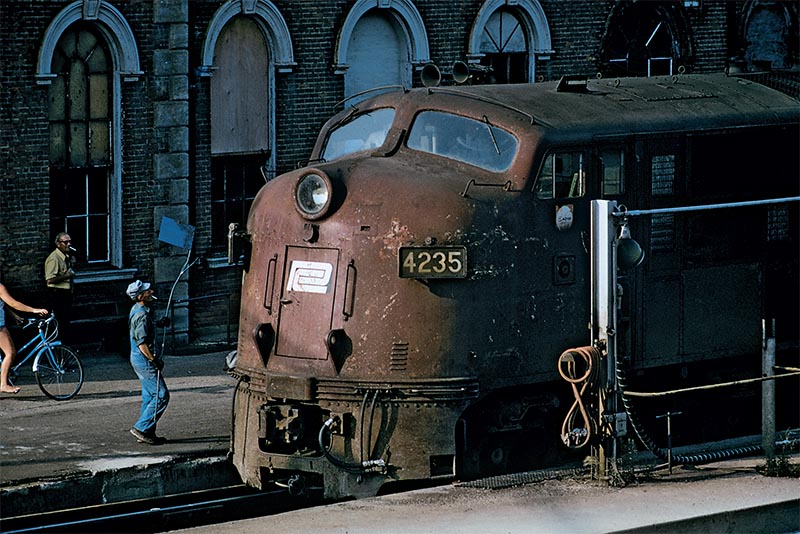 Desperate for motive power but in the depths of bankruptcy, Penn Central used surplus E units on mail trains operating between northern New Jersey and Chicago or East St. Louis. One of those trains, Train No. 9, a South Kearny, N.J., to Chicago run, pauses at Crestline, Ohio, to take on fuel, water and a new crew in June 1973. Prior to departure, a carman removes the blue flag from E7 No. 4235, signaling that all work is completed and the train is once again in the hands of its crew. Per the rules, only the person who installed blue flag protection can remove it. David P. Oroszi collection 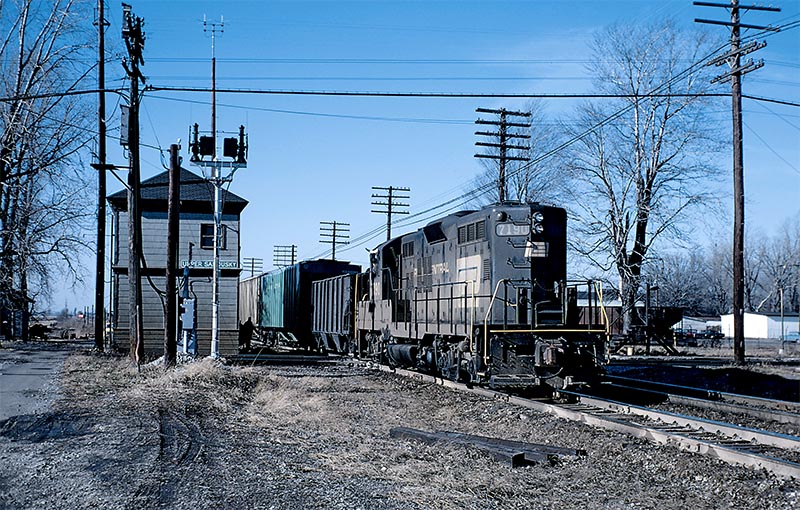 Eastbound local FW-2 was working Upper Sandusky, Ohio, on an unseasonably warm January 3, 1972. The engineer watched for hand signals as GP-9 No. 7190 straddled the Chesapeake & Ohio diamond at SA Tower. After finishing its Upper Sandusky work, FW-2 ran east to Bucyrus to do some switching and then turned and worked its way home to Fort Wayne. Photo by David P. Oroszi 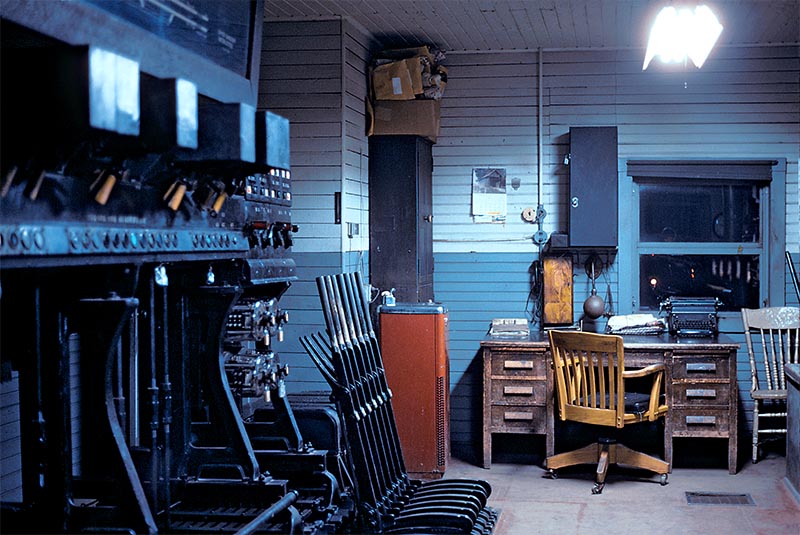 Let’s step inside SA Tower at Upper Sandusky, Ohio, and take a look around. Like many towers between Crestline and Fort Wayne, SA was equipped with “armstrong” levers to move the switches and pistol grips to line the signals. Photographer DeVene had the best of both worlds; he watched trains for pay and worked SA tower in the 1970s and 80s. Photo by Dale DeVene, Jr. 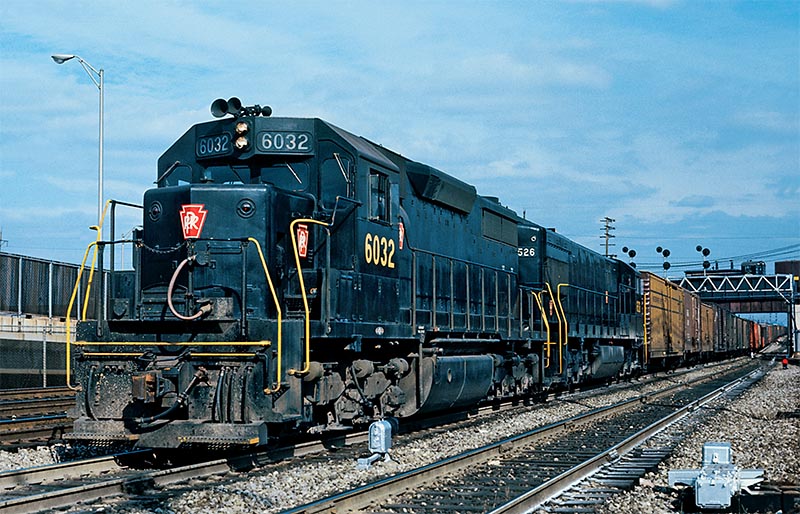 With two of Pennsy’s newest diesels in the lead,  an EMD SD35 and GE U28C bring a transfer job into the east end of the Burlington’s Cicero Yard in Cicero, Ill., in 1966. In the distance, a Belt Railway of Chicago job switches above the train on BRC’s Kenton Line, which linked the Milwaukee Road in the Cragin neighborhood of Chicago with Clearing Yard. Photo by Mike Schafer 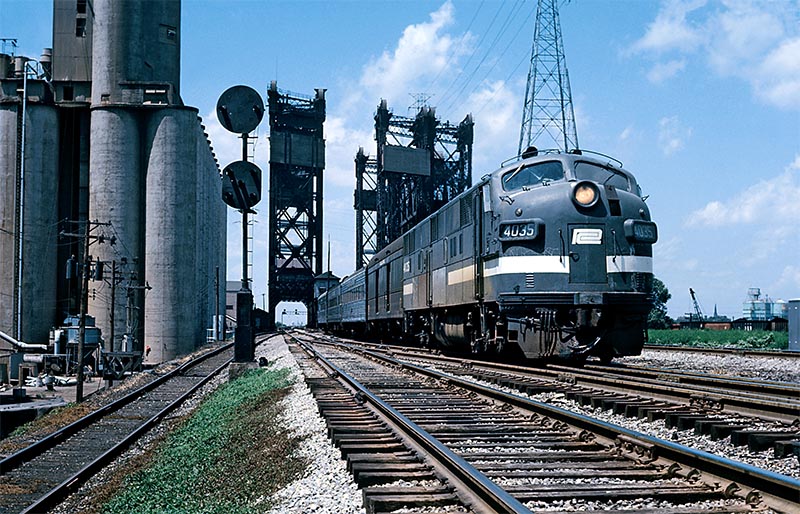 Penn Central Train No. 64, bound for New York City via the former New York Central, slips through River Branch Junction interlocking on a June morning in 1969 after clearing the Calumet River lift bridge. The former NYC lift bridges are to the right of the former PRR bridge. Even though the NYC bridges were still in service at this time, Penn Central consolidated east-west passenger operations into Chicago Union Station thus the reason the train is on the former PRR. The former PRR Calumet River Line Secondary Track dropped down the embankment to the left of the train. This line served industries such as Acme Steel and Republic Steel along the east bank of the Calumet River. Photo by Morgan McIwain 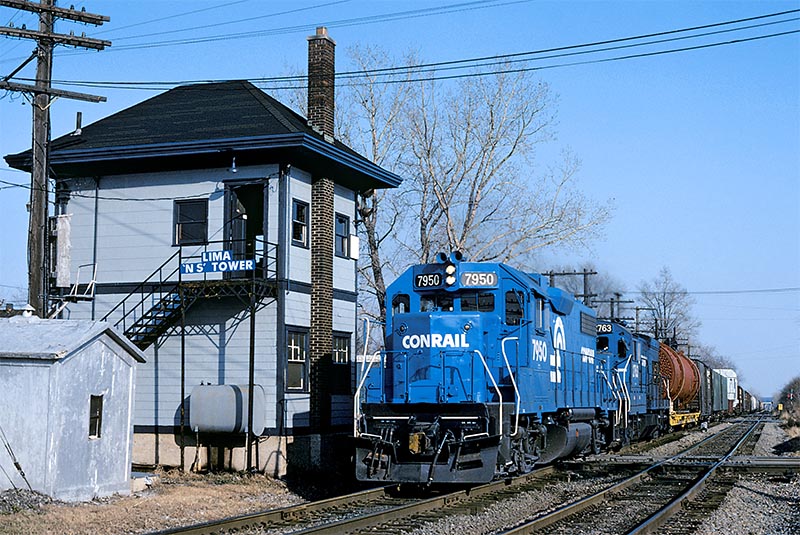 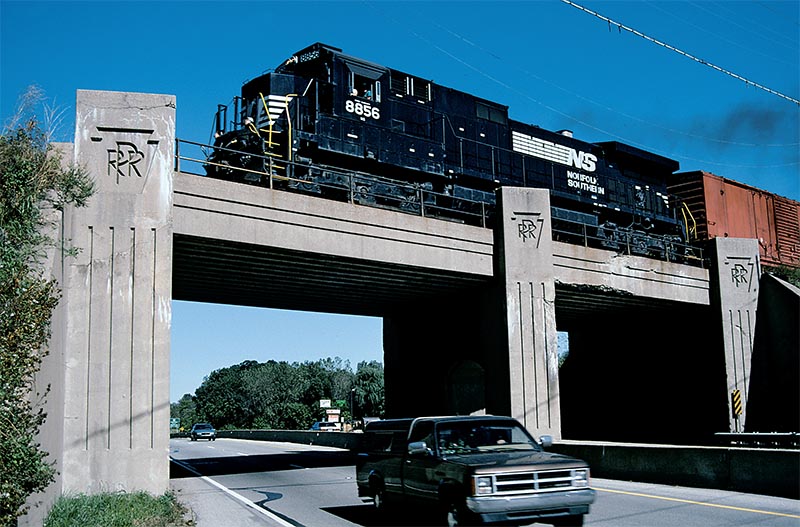 This wonderful piece of vintage highway architecture in Valparaiso, Ind., illustrates the relationship between the Pennsylvania Railroad and the Lincoln Highway, U.S. Route 30. The two were intertwined from New York to Valparaiso, getting more than a few miles apart from each other only in central Pennsylvania. By the time of this September 1, 1995, photograph, Norfolk Southern owned the Fort Wayne Line through Valparaiso, using the line as an alternative route to its parallel, former Nickel Plate Road Chicago District. A single C40-9 easily handled a westbound freight through town on this hot afternoon. Photo by Frederick J. Ripley 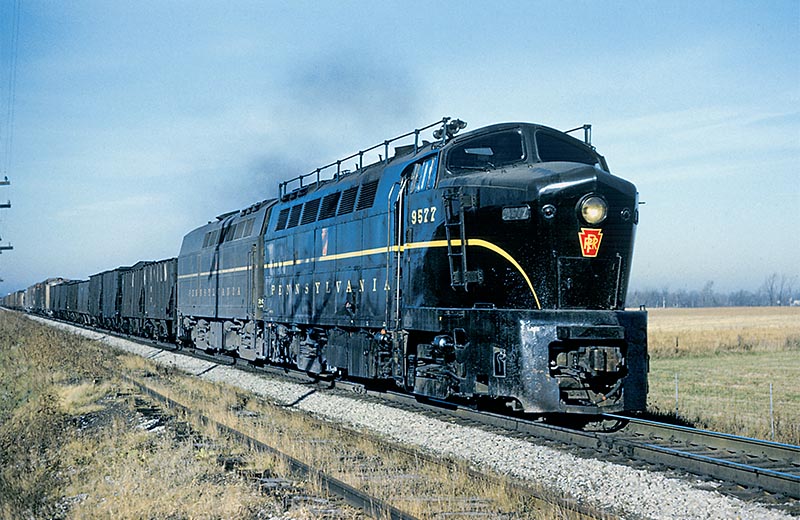 An A-B set of Baldwin DR4-4-15 (PRR class BF15a) “Sharks” hustled a southbound mixed freight between Pen and Ink in the fall of 1963. The 9577 wore a fresh coat of Dark Green Locomotive Enamel even though its operating days were numbered. Photo by Jim Roberts)