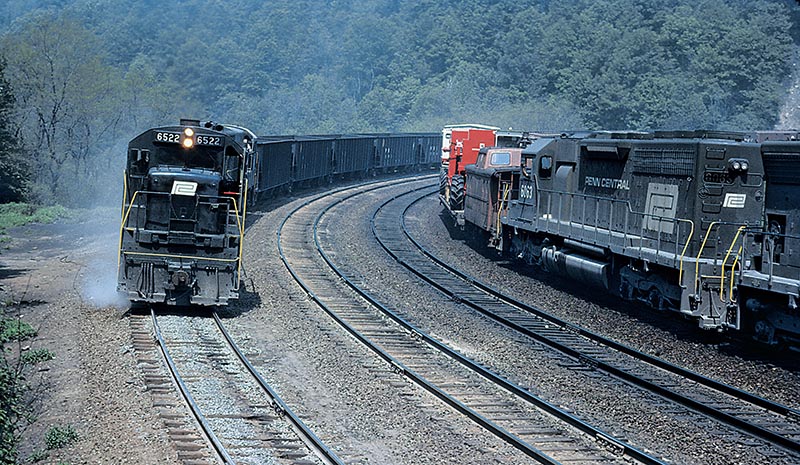 The sand is flying as a pair of Penn Central U-Boats led by U28C #6522 are struggling to drag an empty coal train around Horseshoe Curve while an SD40 and an SD45 hold an eastbound train in check on the downgrade with their dynamic brakes howling. The EMD’s had pushed the train with the dimensional loads up the west slope and will continue to Altoona, Pa., where they will wait for the next westbound train that needs a shove. Photo by Jim Boyd, collection of Kevin EuDaly.

Penn Central! It is hard to believe that a railroad who had Baldwins and Fairbanks-Morse diesels on their roster, assigned F-units to freight trains and sets of E-units to mail trains, used a fleet of big ALCO’s to haul ore trains to steel mills and maintained a class of vintage streamlined electrics was one of the most despised in history! There are likely reasons for this. First, the merger meant the loss of three carriers with legions of fans and long, rich histories. Second, their financial situation was miserable and finally, you can top it all off with a black and white paint scheme with a modern corporate logo that just didn’t look very “railroady.”

Looking back, however, it was a fascinating operation, including activity on many light secondaries that disappeared very quickly as Conrail, and then, deregulation, came along. Unlike the mostly sterile railroad environment of today, Penn Central was a wonderfully disheveled operation, with weedy branch lines (and main lines, for that matter!), obscure operations, manned towers and wild lashups of motive power. Plus, there’s one more really positive thing you can say about them — they ran trains!

It wasn’t uncommon to see two or three trains at the same time on Horseshoe Curve. They kept the Northeast Corridor humming with both passenger and freight trains, too. Granted, it wasn’t the Pennsylvania Railroad of 1936, but you couldn’t really expect that after the after the advent of jet travel and the construction of the interstate highway system that things would stay the same.

For all of Penn Central’s woes, it still was a very interesting railroad to photograph and experience. In many cases you could still find a friendly operator to give you a line-up, or chat with a train crew waiting at a siding for a meet. You had a good chance of catching interesting motive power and the many of the signals, towers and other goodies from the vanquished roads remained intact for PC’s entire existence! We’ve put together a sample of Penn Central photography for the celebration of their 50th anniversary and hope you enjoy the memories as much as we do! 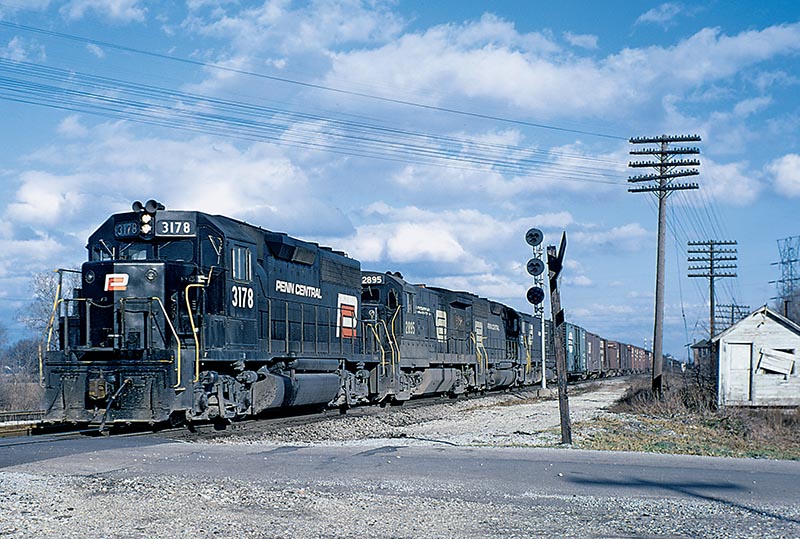 Just west of Wright-Patterson Air Force Base in Dayton, Ohio, a westbound Penn Central train is crossing McFadden Avenue in December 1971. McFadden Ave. is named after a former Dayton Fire Department Chief, and leads to the Dayton Fire Dept.’s fire training center. The track on the left side of the telephone pole is the Erie Lackawanna line running from Marion to Dayton, known as the Dayton Branch. The EL and NYC’s line were next to each other and used as double track from Dayton to a place west of Springfield, Ohio, called Cold Springs. The tower in the distance is the PC/NYC’s Tates Point (SI) where the Erie and NYC cross the B&O’s North Dayton Cutoff, a secondary main line running from their Needmore Yard to Tates Point to connect with the Wellston Sub from Dayton to Chillicothe. New GP40 no. 3178 is sporting the very unusual “Orange C” scheme, which was only applied to seventeen GP40’s (3170-3186) by EMD in October 1968 and then the following year New Haven RS3 no. 5585 received it. There were also more than a hundred “Red P” diesels of varying makes and models, plus some rolling stock. Photo by David P. Oroszi. 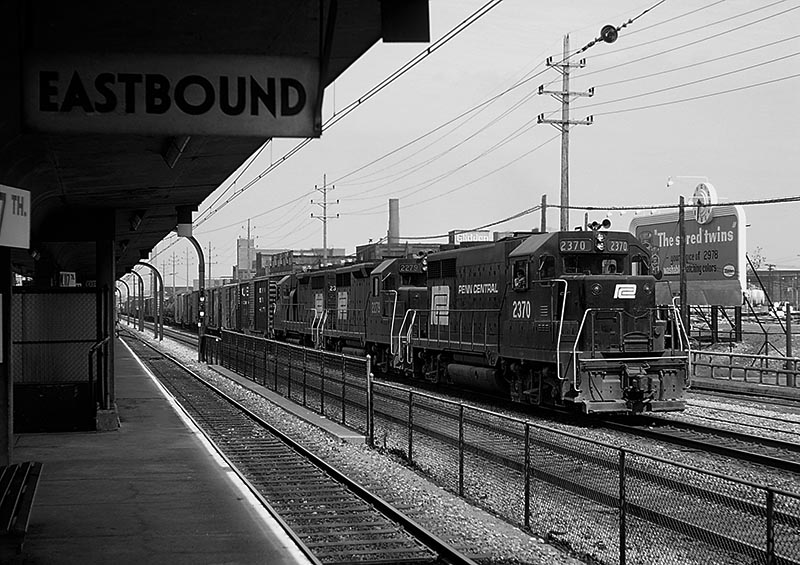 A former New York Central GP35 (no need for dynamic brakes on the Water Level Route!) and two ex-PRR GP35’s are powering a westbound mixed freight past the Cleveland Transit System’s 117th Street station in May 1970. The train is traveling on the old Lake Shore & Michigan Southern, while the curved catenary supports are for the eastbound track of the CTS heavy-rail electrified service. In 1955, this was the end of the line, but the trackage was extended to Hopkins International Airport on November 15, 1968. This was the first airport in the United States to be served by a rapid transit system. Kodachrome by Thomas A. Biery. 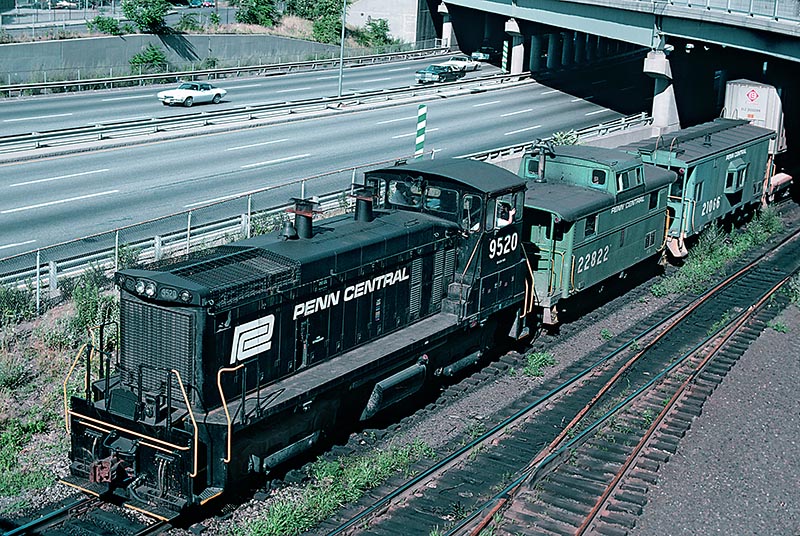 A wide angle lens catches jet black Penn Central SW1500 #9520 switching loaded piggyback flats at the old New York Central Beacon Park yard just west of Boston. According to the sublettering on the cab, this switcher is maintained right here, so it likely does not travel far from home. Unlike the modern SW1500, which Penn Central purchased new in 1972, the cabooses are hand-me-downs, with the N5B #22822 having been built by the PRR in 1941 and the NYC’s Despatch Shops constructing the N7B bay window in 1963. These were the last cabooses built for New York Central. The Massachusetts Turnpike, seen prominently in this photo, is a superhighway completed in 1964 that connects the cities of Boston and Albany… Sound familiar? It’s no wonder the railroads had such a difficult time in the 1960’s, as their near-monopolies crumbled under the blades of earthmovers. This Kodachrome was taken by Ralph Phillips from the pedestrian walkway just west of Cambridge Street in Allston, Mass. Slide from the collection of J. Serensits. 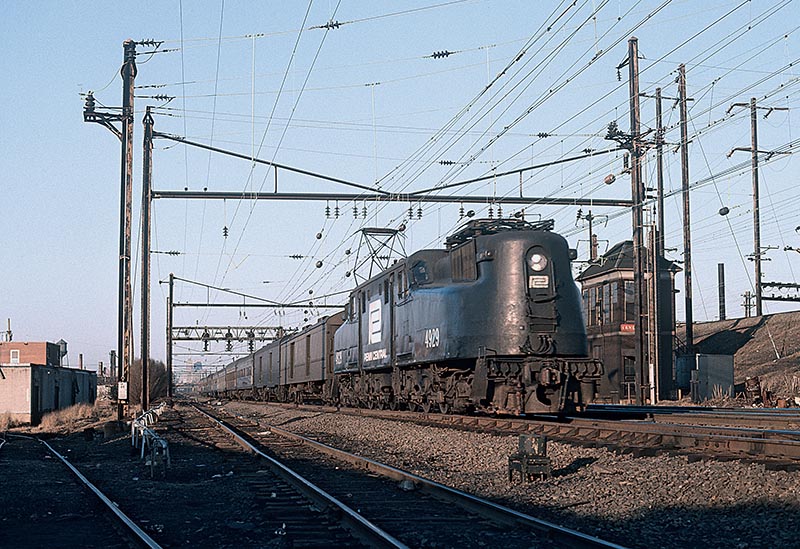 This venerable GG1 is now wearing black paint, but the tower sign is still red! The shadows are getting long as 4929 races past Lane Tower with a westbound train on track 4. Lane interlocking is one of the great examples of the old Pennsylvania Railroad’s engineering marvels that were designed to keep traffic moving along efficiently. Many freights used tracks 2 and 3, and would tie up track 1 when entering Waverly yard, just beyond the tower. Pennsy elevated track 1 on the fill seen beyond the tower in order to allow freights to enter and leave the yard without blocking the eastbound passenger main. Lane was originally called “NK” because Neck Lane had once crossed here at grade! The tower was renamed “Necklane” around WWII when it was upgraded to electro-pneumatic operation — notice the C.P. valve in the foreground for controlling switches. Medium format slide by Ray Scott. 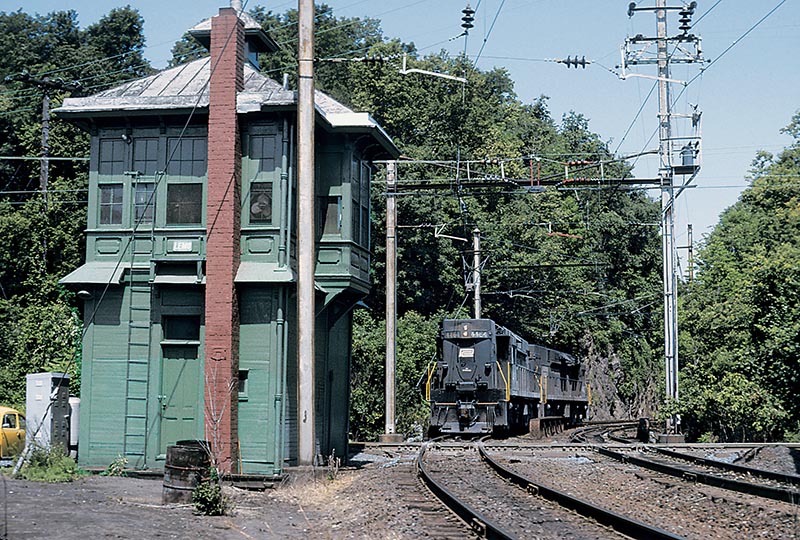 A pair of no-nonsense E44 electrics are running light at Lemo tower on a sunny summer day in Lemoyne, Pa. Lemo is where the Northern Central’s York Haven line crosses the Cumberland Valley branch to Hagerstown, Md., and Winchester, Va. Enola Yard is located north of here, beyond the locomotives, and the magnificent arch bridge across the Susquehanna River to the Harrisburg train station is to the right. Both the NCRR and the CVRR were subsidiaries of the Pennsylvania Railroad. The historic tower was moved to Strasburg, where it has been meticulously restored to its original Pennsy appearance, including its original name — “J” Tower. The tower was built in 1885 and the crossing was interlocked in 1907. Photo by Jim Boyd, collection of Kevin EuDaly. 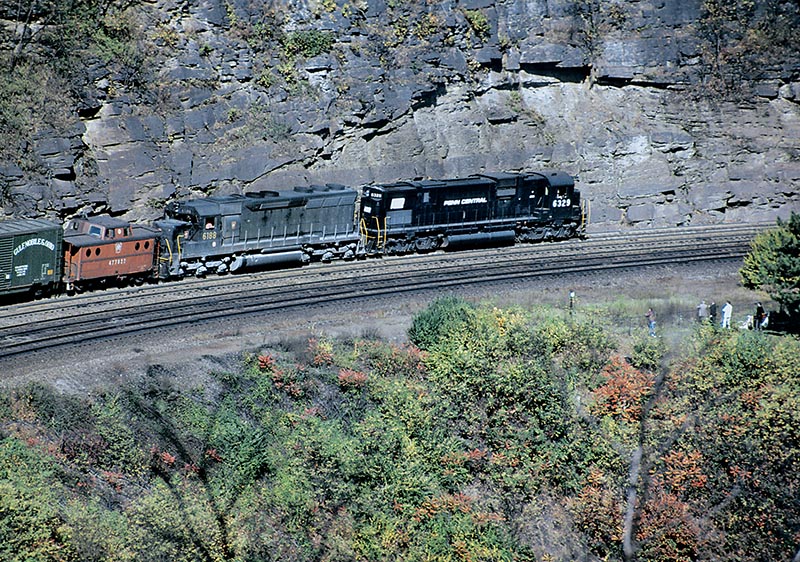 In October 1968, Penn Central C630 #6329 and SD45 #6188 are pushing an eastbound merchandise train up the east slope of the Alleghenies alongside a sheer rock wall at Horseshoe Curve. Former PRR N5C cabin #477822 with “porthole” windows later became Penn Central #23145, and was painted Conrail blue with the same number. The car eventually was purchased by Rochester & Genesee Valley Railroad Museum, where it is stored pending restoration. Photo by Jim Boyd, collection of Kevin EuDaly. 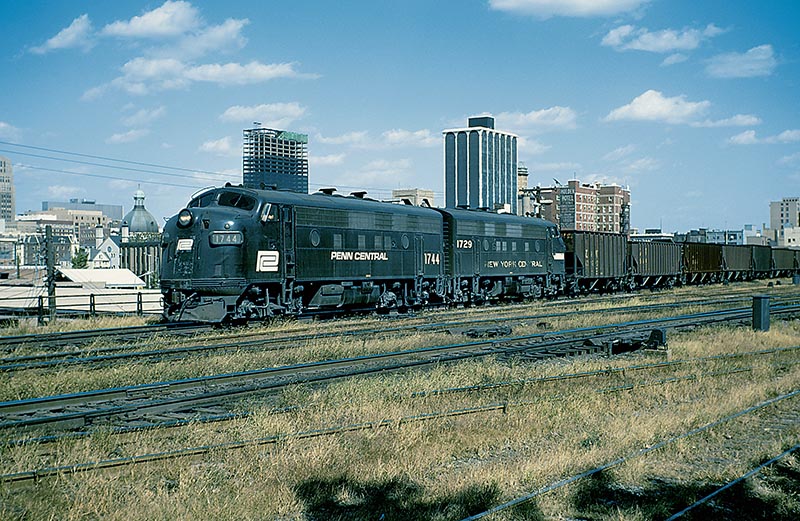 On October 3, 1970, Penn Central F7A’s #1744 and 1729 are bringing a westbound empty coal train back to Cincinnati to interchange with the Louisville & Nashville to get more Kentucky coal. The train is on the former New York Central’s elevated Columbus to Cincinnati main line and is just west of Union Station with the Dayton skyline in the background. The skyscraper being constructed in the distance will become the Winters Building. Photo by David P. Oroszi. 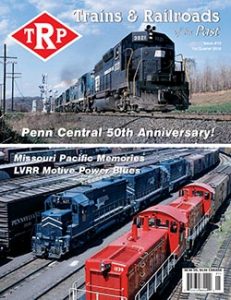 Read the rest of this article in the 2018-1 issue of Trains & Railroads of The Past! 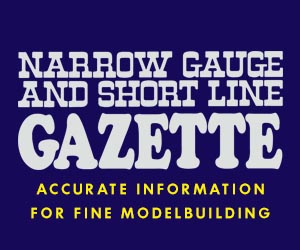